The Milwaukee Bucks and Phoenix Suns meet for the second and final time in the regular season as both teams bid to make it all the way to the NBA Finals once again.

The Phoenix Suns are the best team in the NBA right now with a record of 51-12 and leading the way in the Western Conference 8.0 games clear of everyone else, while the Bucks sit 3.5 games back from the Miami Heat at the top of the Eastern Conference, in third position.

The Suns are a team which are more about collective depth and the sum of the parts, but they are missing star guards Chris Paul and Devin Booker through injury. The Bucks have two-time MVP Giannis Antetokounmpo and around him, they also have Jrue Holiday and Khris Middleton as the main backup options.

Enjoy the action as both teams take on each other in what should be an intriguing clash.

TALE OF THE TAPE:

Milwaukee will try to prolong their three-game win streak with a victory over Phoenix.

The Bucks have gone 22-12 in home games. Milwaukee scores 113.8 points while outscoring opponents by 3.6 points per game.

The Suns have gone 23-5 away from home. Phoenix rank third in the Western Conference giving up just 105.8 points while holding opponents to 44.1 per cent shooting.

The two teams match up for the second time this season. The Suns defeated the Bucks 131-107 in their last meeting on February 11. Deandre Ayton led the Suns with 27 points, and Khris Middleton led the Bucks with 21 points.

Giannis Antetokounmpo is shooting 54.3 per cent and averaging 29.4 points for the Bucks. Bobby Portis is averaging 2.8 made 3-pointers over the last 10 games for Milwaukee.

Cameron Johnson averages 2.7 made 3-pointers per game for the Suns, scoring 12.8 points while shooting 44.8 per cent from beyond the arc. Injured Devin Booker is shooting 44.4 per cent and averaging 26.6 points over the last 10 games for Phoenix. 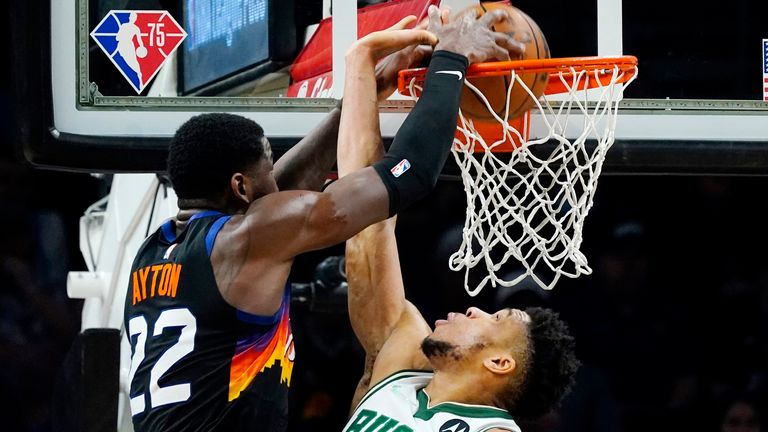 Bucks: Pat Connaughton: out (hand), George Hill: out (neck), Brook Lopez: out (back).