UK business leaders’ confidence “took a tumble” in December as the Omicron coronavirus variant punctured expectations that the pandemic was nearly over, while most directors plan to pass on surging costs to consumers, according to a lobby group survey.

The Institute of Directors’ economic confidence index — the proportion of directors saying they are optimistic about the UK economic outlook over the next year minus those that are pessimistic — plunged to minus 17 in December, from minus six in the previous month.

Kitty Ussher, chief economist at the IoD, said the “already fragile” business confidence in the UK macroeconomy “took a tumble in December as the Omicron variant altered consumer behaviour and dashed hopes that the pandemic was behind us”.

The figure, which is based on interviews conducted between December 13 and 30, thereby fully capturing the impact of the spread of Omicron, was down from plus 27 per cent in June and was the lowest score since November last year, when most of the country was in lockdown.

The IoD is a non-party-political organisation, with approximately 20,000 members from most sectors, including chief executives of large corporations as well as directors of start-up companies.

The survey also showed that around three-quarters of directors said they expected costs to rise in the next 12 months, with a similar proportion saying they would raise prices fully or partially to offset the rise in costs. Only 6 per cent of respondents said they would increase investment in areas designed to raise productivity to tackle rising costs.

“We now see widespread evidence of inflationary pressure entrenched throughout the economy with little hesitation on the part of business leaders to pass on increased costs,” said Ussher.

The figures reinforce expectations that UK inflation will surge further above the 2 per cent target of the Bank of England in the months ahead. In December, the bank increased interest rates from 0.1 per cent to 0.25 per cent — its first upward move in more than three years — to tackle inflation that rose to a decade high of 5.1 per cent in November.

The plunge in confidence is likely to hit business investment, Ussher noted, as companies “are less likely to undertake investment if the climate feels uncertain”. 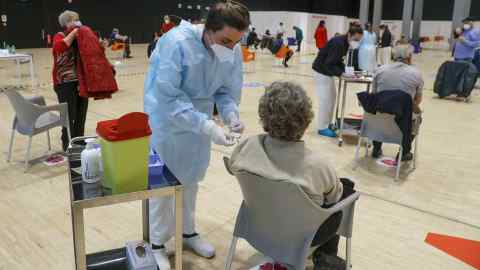 About 31 per cent of directors still expect investment to be higher next year, in line with economists’ expectation of a business investment rebound boosted by the super-deduction tax incentive to spend on plant and machinery.

However, the proportion was two percentage points lower than in November, with a rising proportion of directors expecting investment to be lower next year.

This matters because “we need that investment for the economy to grow”, said Ussher. Investment is a key driver of productivity growth.