Tottenham are angry at rivals Arsenal after they requested to postpone Sunday’s north London derby due to having an insufficient number of players to fulfil the fixture.

The Gunners are set to make the short journey to take on neighbours Tottenham this weekend, but have a host of players missing due to coronavirus, injury, suspension and the Africa Cup of Nations.

The Premier League will decide on Saturday whether the fixture will go ahead.

🚨 We can confirm we’ve made an application to the Premier League to postpone Sunday’s north London derby.#TOTARS

Sky Sports News understands the Tottenham hierarchy are angry at the thought of the game being postponed and believe there isn’t currently a coronavirus outbreak at Arsenal.

However, earlier this week Leicester’s game at Everton was postponed for a second time with the Premier League stating they accepted the Foxes’ application “due to COVID-19 cases, injuries and players on international duty at the Africa Cup of Nations”.

An Arsenal statement read: “We can confirm we have made an application to the Premier League for the postponement of Sunday’s north London derby against Tottenham Hotspur.

“We have reluctantly taken this step but we have many players currently unavailable across our squad as a result of Covid, injuries and players away with their countries at AFCON.

“We will provide more information as soon as it’s available.”

Gunners midfielder Martin Odegaard missed Thursday’s goalless Carabao Cup semi-final first-leg draw at Liverpool due to COVID-19, while Emile Smith Rowe and Takehiro Tomiyasu had been ruled out through injury.

Meanwhile, Thomas Partey, Mohamed Elneny, Nicolas Pepe and Pierre-Emerick Aubameyang are all away at the Africa Cup of Nations.

A statement from the Premier League said: “The Premier League has received a postponement request from Arsenal FC relating to their away match against Tottenham Hotspur, due to be played at 4.30pm on Sunday 16 January.

“The Premier League Board will meet tomorrow to review the application and inform both clubs and their fans of its decision.”

Arteta: Our intention is always to play 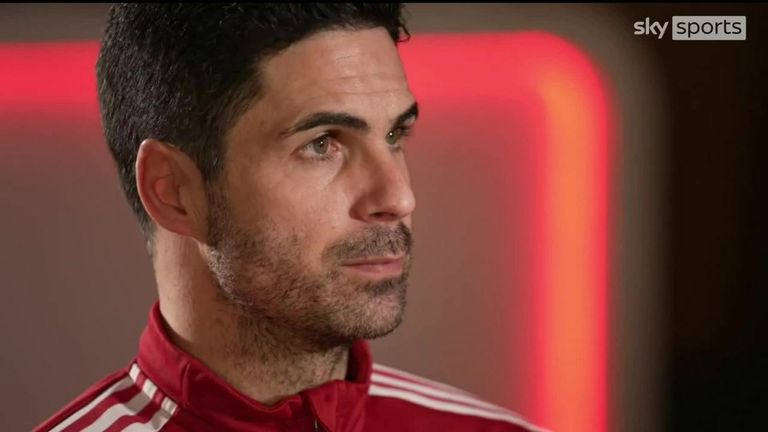 Earlier on Friday, Arteta insisted he was preparing for the game to take place after fixtures against Wolves and Liverpool were postponed in the past month at the request of the opposition.

Asked if he would like the game off, he said: “I don’t know, it’s difficult to say that with total honesty without assessing our players.

“What is today very unlikely, tomorrow is likely to happen. It’s gone the other way for us when we were ready to play a match and it was cancelled twice because the other team had issues so it can go both ways. But our intention is always to play.”

Conte: We have many injuries but we’re preparing for game

Tottenham boss Conte is also being hurt by the absences of key players with Eric Dier, Heung-Min Son, Cristian Romero and Sergio Reguilon all expected to miss the game, while the club are also checking on a coronavirus case.

The Italian said: “For us, much more than other teams it’s very, very important to recover all the important players. Yeah, it’s life for us to recover these players.

“As you know very well, we have many, many injuries. And then there is always the Covid situation everyday, that you have to check.

“Sometimes you find a surprise. But we are preparing the game against Arsenal.” 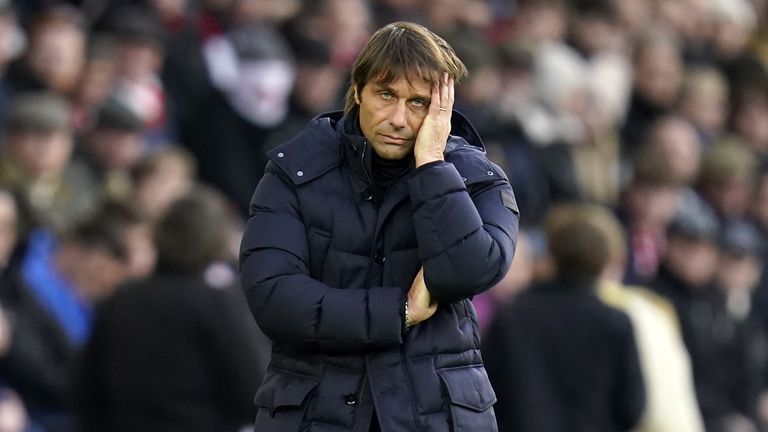 Speaking on Friday Night Football, Neville said: “I honestly believe that all teams, not just in the Premier League but the EFL now, must be made to play their fixtures.

“Folarin Balogun and Ainsley Maitland-Niles have gone on loan, Granit Xhaka’s got a red card – that’s not the fault of anybody else. We can’t be calling fixtures off.

“If it was purely down to Covid in extraordinary circumstances where there was 10 or 15 players out, but we’re now talking about teams for the last few weeks where there’s no doubt they’ve been calling games off based upon whether they think they’ve got the best squad or team to win a game. It’s got to stop.

“For me, it [Arsenal’s request] should be rejected.”

Gary Neville and Jamie Carragher have their say on whether Premier League clubs should be allowed to call matches off due to Covid, injuries and the African Cup of Nations.

Carragher said: “No other league in Europe is doing this, certainly not in those big leagues. Bayern Munich played a 16-year-old in their last game and that tells you exactly where they are. Why can’t we do that? Why can’t the young players be given an opportunity in these circumstances?

“You’ve got U23 squads and younger players, and this is an opportunity where they can get a chance.

“I know there’s a lot riding on Premier League games but at this moment there’s no doubt teams up and down this country are taking advantage of the situation.”

Earlier on Friday, Burnley’s Premier League match against Leicester on Saturday was postponed due to Covid cases and injuries in the Clarets’ squad.

It is the fourth Burnley match this season to be postponed due to Covid-19 but the first time the request has come from the Turf Moor club. The relegation-threatened Clarets also had another fixture, against Tottenham, postponed at short notice due to heavy snow.

A league statement said: “The Premier League Board accepted Burnley’s application as the club does not have the required number of players available for the match (13 outfield players and one goalkeeper), due to COVID-19 cases and injuries.”

The re-arranged match against Watford is scheduled to take place on Tuesday, though must now be in doubt.

Burnley were without seven players due to Covid-19 during last weekend’s 2-1 FA Cup loss to Championship side Huddersfield, a match that was also missed by manager Sean Dyche, and have since seen Chris Wood join Newcastle.

Tuchel ‘very angry’ if Covid rules are being abused

Asked if he felt Covid rules were being abused, Chelsea head coach Thomas Tuchel said on Friday: “I strongly, strongly hope that’s not the case, otherwise I would be very angry.

“We are doing everything to make games happen and we were made to play when thought maybe we should not. So, I can only strongly hope the rules are the same for everybody.”

Chelsea have reported one positive Covid-19 test ahead of the trip to Manchester City for Saturday’s 12.30pm kick-off in the Premier League, with Andreas Christensen now isolating.

The Denmark defender had only recently returned from a spell out injured, but is once again sidelined after returning a positive test. Thiago Silva and N’Golo Kante are, however, both in contention to be involved, albeit with very little training time under their belts.

“We have one positive Covid test, with Andreas Christensen,” Tuchel said. “So he will be out for this game.

“To have the news that Andreas Christensen is again out after we waited so long for him, and now he plays so, so strong, and again he’s out. It’s a bit of a setback for everybody, for us mentally.

“You finally have players back, and it’s just like catching fish.”

Hasenhuttl: PL ‘opened the door’ to Covid rules being twisted

In his press conference on Friday, Southampton manager Ralph Hasenhuttl was strong on the lack of transparency for postponements and how the Premier League is dealing with it.

“They’ve opened the door, and you cannot be surprised that someone is walking through now. I cannot say anything about the Covid situation there because this is normally the reason why you cancel games.

“You have no view, no transparency, and you cannot say anything about that. The rest is speculation.

“The Premier League has to handle this. This is why I say that players/new signings shouldn’t be allowed to play in cancelled games when they haven’t been there before this game was due to play. This is a problem they have and it’s hard to solve it at the moment.”

Which Premier League games have been called off?

Everton vs Leicester – Tuesday January 11 (as above, this game had already previously been postponed from its original Sunday December 19 date)

What are the Premier League rules around postponements?

The 2021/22 Premier League handbook included Covid protocols and stated the Premier League’s board will “only permit the rearrangement or postponement of a league match in exceptional circumstances”.

The board make calls on a case-by-case basis, and by way of guidance the Premier League says permission for a postponement will not be granted if a club have 14 or more players from their squad list available.

However, after the postponement of a number of games in the weeks leading up to Christmas, a new Premier League guide explaining match postponement protocols was published.

And there, these factors are considered when deciding whether to postpone a top-flight game:

1) The impact of COVID-19 infections on a club’s squad, as well as injuries, illness and those isolating, and the number of players available on the squad list and any Under-21 players with appropriate experience. Where a club cannot field 13 outfield players and a goalkeeper either from its squad list or its appropriately experienced Under-21 players, the match will be postponed.

2) The status of any COVID-19 outbreak within a club, including the number of individuals affected, the sequence and source of infections and their proximity to the match in question.

3) A club’s ability to safely prepare its players in the lead-up to a match.

4) Medical advice as to whether there is any unacceptable risk to the health and safety of players and staff by playing the match.

5) Any advice from UK Health Security Agency and other public bodies.

6) Any other exceptional circumstances.