Up to 10 parties are considering making bids for Chelsea, with investment bankers working on the sale expecting most of the interest to come from the USA.

Russian, Chinese and Middle Eastern money has been behind the acquisition of many English clubs over the past two decades but everything has changed since the Chinese government’s crackdown on foreign investment and Russia’s invasion of Ukraine.

Instead, the majority of potential buyers of Chelsea, who will register their interest with investment bank The Raine Group, are expected to be based in the States.

Current owner Roman Abramovich – who has set a £3billion asking price – wants to make sure the club is sold to someone or a group who will carry on his policy of investing in the squad with a view to redeveloping Stamford Bridge or building a new stadium.

Foreign secretary Liz Truss wants to sanction Abramovich but the National Crime agency needs to prove a link to Vladimir Putin before the government can take action.

Turkish billionaire Muhsin Bayrak says he is trying to buy Chelsea and although his spokesperson has told us he has made a bid, his claims are being viewed with some scepticism.

Bayrak is quoted in Turkish newspaper Yeni Safak as saying: “We are discussing the terms of Chelsea’s purchase with Roman Abramovich’s lawyers. We are in the negotiation phase. We will fly the Turkish flag in London soon.”

A spokesperson for Bayrak has told us: “First of all yes the news is true. We submitted our offer.”

FREE TO WATCH: Highlights from Chelsea’s win over Burnley in the Premier League.

Meanwhile, a Swiss-American consortium, which includes Todd Boehly and Hansjorg Wyss, is preparing to make a bid to buy Chelsea. Boehly tried to buy Chelsea from Abramovich for £2billion in 2019. He has made no secret of his desire to buy a top Premier League club.

Investment bank The Raine Group are marketing Chelsea’s sale and will ask interested parties to sign a non-disclosure agreement and show proof of funds.

Raine Group co-founder Joe Ravitch has told Reuters: “We are not going to rush anything. It is very important that Chelsea have the right owner to guide the club forward.”

Who are the potential bidders?

Todd Boehly-Hansjorg Wyss consortium – Boehly tried to buy Chelsea in a £2.2billion deal three years ago and he still wants to buy a Premier League club. The LA Dodgers part-owner has teamed up with Swiss billionaire Wyss. They are unlikely to pay the £3billion asking price.

Muhsin Bayrak – The Turkish businessman’s spokesperson has told Sky Sports News that he has submitted an offer for Chelsea but his claims are being treated with caution.

Thomas Ricketts – The chairman of the Chicago Cubs is looking for investment opportunities outside the US and was part of a consortium that tried to buy AC Milan in 2018.

Nick Candy – Property developer and Chelsea supporter who is interested in putting together a consortium to buy the club.

Conor McGregor – MMA fighter and Manchester United supporter who claimed on social media on Friday that he was offering £1.5billion. Not thought to be the profile of owner Abramovich is looking for.

Sir Jim Ratcliffe – Britain’s richest man has looked at buying Chelsea before but he is known to believe that Premier League clubs are overpriced. Bought Nice and FC Lausanne instead. His spokesperson has distanced him from a move for Chelsea.

Loutfy Mansour – Egyptian businessman is a Chelsea season-ticket holder but his spokesman says he is not pursuing a bid. 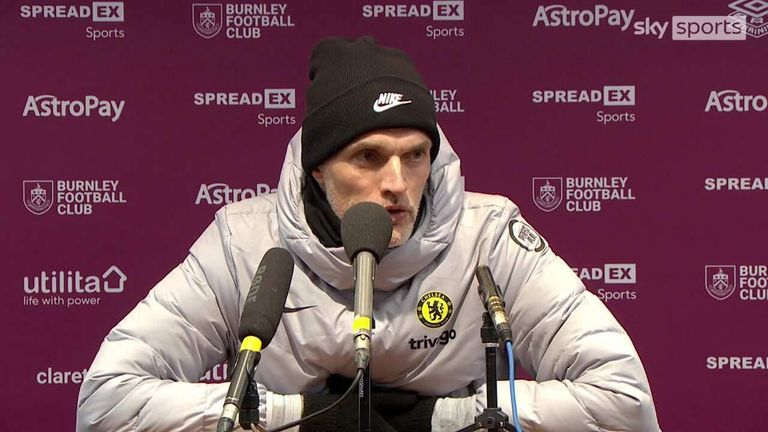 Thomas Tuchel says it’s not the time for other messages after some Chelsea fans sang Roman Abramovich’s name during the pre-match applause for Ukraine.

There are only a handful of billionaires who would be able to pay Abramovich’s asking price but any potential sale is complicated by:

Tuchel: No problem staying in charge despite Abramovich exit

Thomas Tuchel says he has “no problem” remaining Chelsea head coach despite Abramovich’s plan to sell up, insisting he “loves everything about the club”.

Tuchel, who was appointed under Abramovich’s ownership in January 2021, admits the owner’s decision to sell has created “uncertainty”, but has no doubts about his own future.

Asked if he would have a problem remaining at Stamford Bridge, the head coach said: “No, the opposite of a problem staying here.

“I said many times that I love working in the Premier League, I love to be in England and feel the tradition and the love for sports in general and football in particular. It’s an amazing place to be.

“Chelsea is, for me, the perfect fit. I love to be here, I love everything about the club and hopefully it continues.”