Arsenal boss Mikel Arteta insists Bukayo Saka’s penalty miss at Euro 2020 was “great for his career” after the England international scored one goal and set up another in the 3-2 win at Watford.

Saka provided the assist for Martin Odegaard’s early opener at Vicarage Road, which was soon cancelled out by Cucho Hernandez’s overhead kick.

The Arsenal academy graduate then restored his side’s advantage after a well-worked one-two with Alexandre Lacazette, before Gabriel Martinelli added a third.

The Gunners looked to be cruising before Moussa Sissoko pulled a goal back in the 87th minute, but the Hornets were unable to find an equaliser.

FREE TO WATCH: Highlights of Arsenal’s win against Watford in the Premier League.

“I think Bukayo had an experience in the summer that not a lot of players would ever have and I think it was great for his career because the football world showed how much they like him and how much they respect him,” Arteta said.

“I think that was a big boost for him to realise in difficult moments that people are going to give him support, and the club did exactly the same as his team-mates.

13 – Bukayo Saka has been directly involved in more goals than any other under-21 player in the Premier League this season (8 goals, 5 assists). Across the big five European leagues, only Florian Wirtz (17) has more combined goals and assists this term. Jewel. pic.twitter.com/TJ84E25Myz

“Then it’s about giving him that space. What he is already doing is phenomenal and he needs that room. Don’t read too much, do what you do.

“Football is his priority in life and you can see that every day in training and he needs to continue to behave and live the way that he is doing.”

Arteta believes Saka, who has enjoyed an impressive season so far, is better for the experience.

“I think so,” Arteta added. “I think experiences like that mark your career. And what you learn from those difficult moments is much more probably than if you had scored that goal.”

Arteta on Saka and Odegaard…

Arteta on the understanding between Saka and Martin Odegaard:

“I think it’s between them. The way the game flows, the way we attack, how we adapt our positions relating to each other, how we move the ball.

“The speed of the movement, the timing if it is much better, the position that we get, the threat and the sense of having the capacity to create the chances that we have done is much better and we have to keep developing that.”

“These games we really need to win and we showed we can win like this.

“This is the dream this year to be in the top four and qualify for Champions League football. We have to stay humble and focus for now, and speak about it at the end of the season.”

Arteta: I don’t like to look at the table

Arsenal boss Mikel Arteta on the race for the Premier League’s top-four:

“To be fair, I don’t like to look at the table a lot because we have games in hand, we’re going to play different fixtures and I know the objective and it’s only one, to try and improve tomorrow on what we’ve done today and go into the next match and that’s it.

“I cannot control results and I cannot predict which matches we are going to win, draw or lose, it’s impossible.

“If I start to do that I think we’re going to lose focus in what we want to do.” 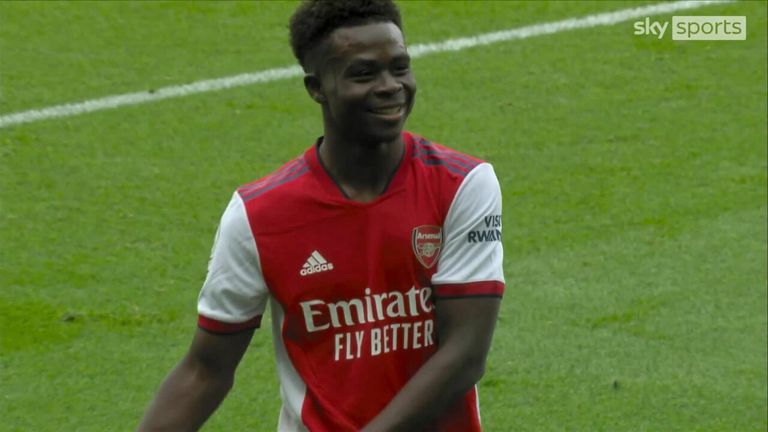 Arsenal re-took the lead at Watford thanks to an excellent finish by Bukayo Saka.

The Sky Sports punditry team were queuing up to praise man-of-the-match Bukayo Saka after the game.

Jamie Redknapp said: “Saka was the outstanding player on show. Everything about his game was class.

“He showed great strength for his goal and played a lovely one-two and the finish into the far corner is so hard to stop. It was a brilliant goal. What a player.”

Roy Keane added: “We’ve mentioned Saka before and he was absolutely outstanding. It was very simple but very effective, the nice and tidy give-and-go with Odegaard for the first goal.

“There was nothing the goalkeeper could do about it. To be fair to Watford, they kept going but they were short of quality. They just concede so many.”

Alan Smith, meanwhile, said: “The best players make the game look easy and Bukayo Saka has done that today. He’s been absolutely superb. What a talent.”

Arteta: Everybody can contribute

Mikel Arteta on if he gets an assist for Arsenal’s third goal:

“I don’t know. But if it helped the team a little bit to get what we wanted, that’s exactly what we need. Everybody can contribute somehow and I had the opportunity to do that, so it’s good.” 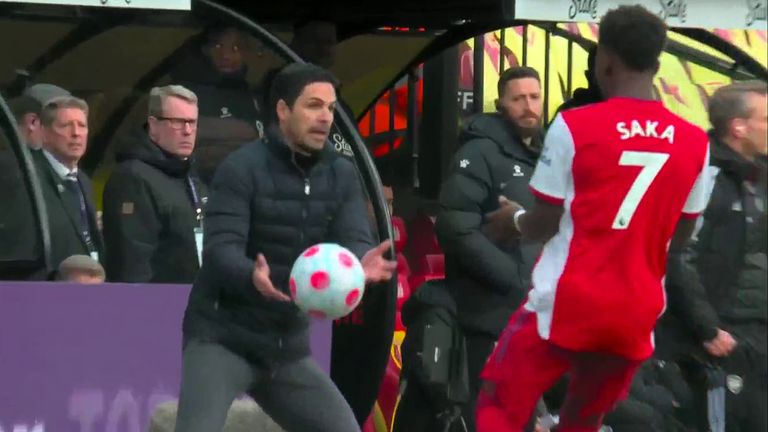 Arsenal moved up to fourth with their 3-2 win over Watford at Vicarage Road and there seems little danger of complacency creeping in under Mikel Arteta.

The Arsenal manager cut a frustrated figure on the touchline for much of the encounter – even berating his players immediately after they had scored their second goal – and later used the opening section of his post-match press conference to chastise their defensive display.

“We were really good going forward,” he said. “We had the right organisation and energy to do it and we scored three magnificent goals, but we didn’t have the same energy and commitment defensively,” he said. “That’s why we suffered.”

And suffer they did. All three of their goals were beautifully worked, featuring slick passing exchanges reminiscent of Arsenal’s best sides under Arsene Wenger, but at the other end their carelessness presented Watford with chances a better side would have taken.

Arsenal hung on in the end, surviving five minutes of stoppage time after Moussa Sissoko had reduced their advantage late on, but Arteta’s eagerness to focus on the flaws in their performance shows he knows there is a long way to go in the race for a Champions League finish.

His exciting young Arsenal side have put their destiny firmly in their own hands with a run of eight wins from 10 Premier League games. But there are bigger tests ahead if they are to make it over the line and, at the back, at least, Arteta knows they will need to be stronger.

Hodgson: I can’t ask any more from the players 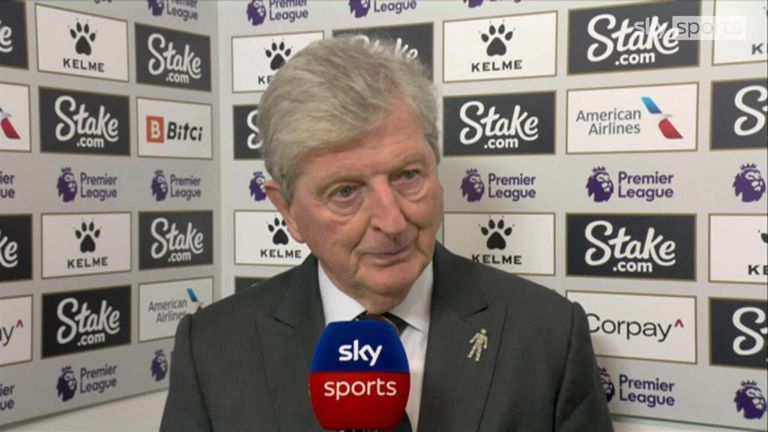 Watford manager Roy Hodgson says he was pleased with his side’s overall performance in the 3-2 defeat to Arsenal in the Premier League but admits the mistakes they made were punished.

Watford manager Roy Hodgson said he could not have asked for any more of his players after they pushed the Gunners all the way and scored two goals in a game for the first time since November.

“This is Watford at the bottom of the table against Arsenal,” said Hodgson.

“They haven’t lost a game since goodness knows when, they’ve got about two games in hand and they are one point behind the top four in the country.

“We always knew that we were going to have to pull out a lot of stops to get something from the game.

I don’t think I can ask any more from the players and what they gave Watford Football Club and the fans today, I really don’t.”

Watford travel to Wolves on Thursday in the Premier League (7.30pm) while Arsenal play next Sunday, live on Super Sunday, against Leicester City (4.30pm).